Superhero of the business world: The Actuary: Part 1 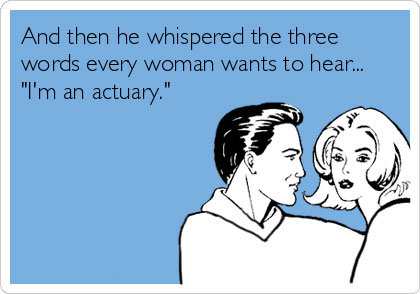 I was recently at a student party one evening and I began to chat to a very pretty lady. You know the kind of pretty that inspires beautiful and passionate classical music. Whilst going through the usual chit chat and social banter, I felt my heart beat just that much faster and I began to feel some anxiety. No, I was not getting the usual nerves associated with asking this girl out. I was dreading her asking me the questions: What do you do for a living and what did you study?

I’m sure the majority of actuarial students as well as actuaries have had to deal with the task of trying to explain to someone what an actuary actually is (I now understand what Chandler in the TV series “FRIENDS” had to go through). Even after all the blood, sweat and tears invested in the many hours of studying and exam taking, it’s actually very difficult to have a precise and concise definition of actuarial science that you can tell someone in an elevator trip or as you briefly meet at a party.

For this reason I thought I write a series of articles exploring actuarial science by obtaining opinions from a variety of people who are involved either as students or as qualified actuaries. I thought I’d interview a fair number of people to get an idea of the variability in people’s opinions on what an actuary does as well as why the variability in society’s opinions about the actuarial profession exists. I will also explore what it takes to become an actuary and why actuarial science is so vital for a society to thrive.

From my experience as a student actuary who is currently working in what would be described as a non traditional role, I have come across a number of different opinions and biases regarding the actuarial profession. Some of these include an over-glorified data analyst, a lavish accountant, a fortune teller, an exam addict, a mathematician, someone who works in insurance, an affluent eccentric introvert, and even a person who works with birds.

So now that we have a fair understanding of what an actuary isn’t, what is this concise definition of an actuary? The fast food response is simply this: a business person. If that Mcdefinition doesn’t satisfy you, the rest of this article will elaborate. Otherwise that bird definition seems much more exciting, doesn’t it?
Why does the word actuary ‘razzle dazzle’ so many people (both in a positive and negative sense) and why then do some of the brightest minds enter the profession if it can have such a broad bland definition that not even those bright minds may not understand when they choose actuarial science? I believe it is because there is a little more to it than just the words business person. To get to my more dazzling definition, I will run through my own actuarial journey.